My husband recently gifted me with a new toy for my kitchen that he found on Brad’s Deals.  An 8-qt. pressure cooker that he got for $50!  WooHoo!  Isn’t it pretty?! 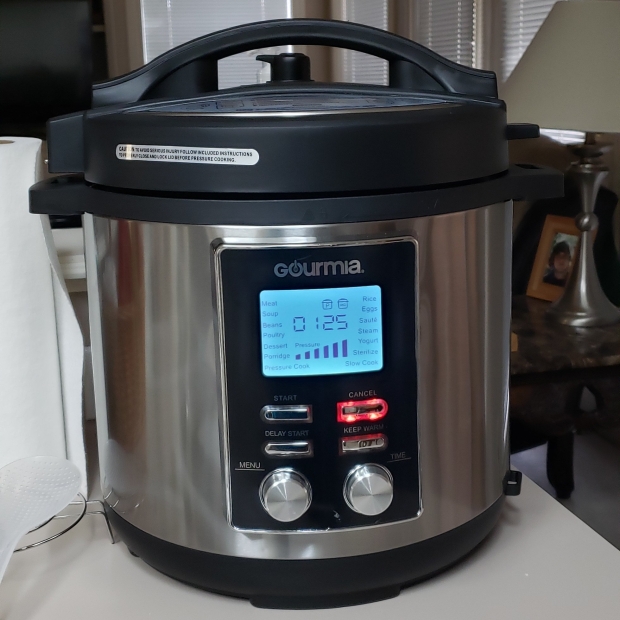 One of the first things I made in it was a super cheesy Mac n’ Cheese, from scratch, in about 20 minutes!  It was awesome and really tasty!

Since then I’ve cooked a roast from frozen to fabulous in about 90 minutes, Egg Roll Bowls in less than 10 minutes start to finish.  I’ve made Curry Chicken, Lentil Stew, and even yogurt!  I am loving this thing!

The kitchen is a more challenging place for me since my diagnosis and as a result, we’ve been eating out more, which isn’t good.  It takes me longer to prepare things and there is a level of frustration that causes me to get a little discouraged and take even longer, or give up altogether.  Then, there’s the whole, “I forgot to thaw the meat!” thing.  With this new pressure cooker, both of those challenges are alleviated.  Even if it takes me longer to do the prep, the cooking time is cut so short that it balances out.  We dont end up eating at 8:00 (which I hate) because I’m a slow poke in the kitchen now, or abandoning the prospect of cooking dinner altogether because I forgot to thaw the meat out.  It’s a win-win!

I’ve only begun to learn all the things I can do with this time-saver.  I’m very excited to try new things in it.  I’m especially excited that I can make my own yogurt again via a much easier process than the crockpot or stovetop, not to mention it’s quicker.  I’m also excited that we got such a great deal!  These things aren’t cheap.  If you’ve never heard of Brad’s Deals you might want to check it out.  Not that this is a plug for them, it’s not.  If you’re in the market for a pressure cooker, that just might be another place to keep an eye out for a deal.  Either way, I’d say a pressure cooker is a good investment for any kitchen!